Description and Supporting Details for Each Approach:

Public Trust Doctrine (PTD) Expansion:  This approach is to go to court to expand the allowable beach activities that are covered under Maine’s PTD.  The PTD is a principle of common law declaring that the state holds title to the beach (from high tide to low tide) in trust for the benefit of the public. The Colonial Ordinance of Maine (and Massachusetts) stated that private ownership of the beach was allowed while preserving the public’s right to access the beach for the purpose of “fishing, fowling, and navigation”.  Maine’s courts have interpreted allowable activities both related to and beyond “fishing, fowling, and navigation”.  Further expansion of allowable activities fall under two categories:

If enough beach activities become allowable, the mentality of certain ocean-front owners that treat Maine’s natural wonder (the beach) like their own personal swimming pool will collapse like a house of cards.

Colonial Ordinance Challenge:  Either or both of the two Moody Beach cases, that determined the applicability of the Colonial Ordinance (CO) to Maine’s beaches, could be re-examined in court, and potentially reversed.  Potential errors in the Moody Beach cases include a.) a misinterpretation of the CO by the court in granting ocean-front properties ownership to the beach, b.) an over-emphasis of the customary beach uses mentioned in the CO while ignoring other customary beach uses, c.) a mis-application of the CO to Maine, d.) errantly declaring the Intertidal Land Act as unconstitutional, etc.  According to Professor Delogu, many of the Moody Beach case decisions conflict with U.S. Supreme Court decisions.  Note that the 1989 Moody Beach State Supreme Court decision was decided by a 4-3 margin – far from a resounding and unanimous confirmation of the Colonial Ordinance.

Titles and Deeds:  This approach consists of researching the history of the titles and deeds of the Moody Beach ocean-front properties to determine if they do in fact own the beach to the low water mark or if the public does.  Although the Maine PTD allows private ownership of the beach, neither the Colonial Ordinance nor the Moody case gave ownership of the beach to the ocean-front properties if their title and deed history shows otherwise.  Goose Rocks Beach in Kennebunkport won a title trial in Superior Court that provided beach ownership (from the seawall to the ocean) back to the town for 96% of the deed histories reviewed.  During the speaker series in 2014 on beach ownership at Laudholm Farm, a Wells/Moody resident (Peter Moody) revealed that his research found that all of the deeds (60 total) in Wells at the time Maine became part of Massachusetts in 1652 (a few years after the MA Colonial Ordinance on beach ownership was written), showed ocean-front property ownership to the HIGH water mark.  Peter Moody's efforts inspired extensive research into Wells historical deeds and how beach ownership was/wasn't addressed.  This was presented as Part 5 of the Laudholm Farm Beach Ownership series.  See Links page for links to the entire report on the subject (~100 pages).

Beach Access Legislation:  In addition to changing Maine’s beach access laws and interpretations through the courts, beach access laws can be changed through the state legislature.  This approach consists of engaging our state representatives to pass legislation that improves public beach access.  Since public beach access is very popular and would provide the State a positive economic impact through tourism, our representatives can be expected to support efforts to improve beach access.  In 1986 the Intertidal Land Act was passed by the Maine Legislature and declared recreational use of the beach was permitted as part of the Public Trust.  Unfortunately, the Moody Beach decision overturned this Act.

Eminent Domain:  Definition – “the right of a government or its agent to expropriate private property for public use, with payment of compensation.”  The Moody Beach Supreme Court decision alluded to this being the approach for public beach access.  Beach access advocate and expert Professor Delogu wrote a recent article that suggested this was the best option to improve beach access (see News & Links page).  Spreading acquisitions over time would keep the costs reasonable.  I would think taking beach areas for public use would be viable when ocean-front properties are FOR SALE - the beach could be purchased via eminent domain for the public while the house could be sold separately.  And ocean-front owners receive a fair market price, so there really would be no losers here.

Beach Access Negotiations:  This approach is to negotiate with the ocean-front owners for access to Moody Beach.  This approach was very successful at Goose Rocks Beach in Kennebunk when a Beach Users Agreement was signed between 60% of the ocean-front owners and the community (for details peruse the various GRB links on the New & Links page for further info).  The leverage the public/ Moody Beach community has to negotiate with the owners will ebb and flow.  Significant leverage currently comes from a.) the GRB title trial providing beach ownership BACK to the town, b.) Professor Delogu's efforts to overturn the Maine Supreme court cases at Moody Beach.  As time goes on leverage will change according to the latest court proceedings and access efforts .......  Interestingly, access to Moody Beach was negotiated before.  After the Moody Beach decision, the town negotiated access for the back-lot owners and their guests for the beach below the mean high-tide level, but this was rejected by the back-lot owners - probably since it was far short of the access they had always had prior to then.

PTD Enforcement / Interpretation:  Ultimately what is and isn’t an allowable beach activity is dependent on how the town enforces the PTD.  This approach includes finding out the specifics on what police look for in determining allowable activities vs. determining trespassing, and using that knowledge to maintain access when contested by an owner.  Approach also could include getting the town to expand what is allowable based on the current list of allowable activities.  For example, a recent call to the Wells police found that if someone has a fishing “line in the water”, they will not be asked to leave.  Similar enforcement details could be used for all activities that are currently allowable under the PTD.

Civil Disobedience:  Civil disobedience is breaking an unjust law.  As Thomas Jefferson said, "If a law is unjust, a man is not only right to disobey it, he is obligated to do so."  A couple examples of civil disobedience being successfully employed is the Boston Tea Party and lunch counter sit-ins to oppose Jim Crow laws in the south.   Civil disobedience can be used to gain enough publicity and support such that the unjust law is changed.  An example for Moody Beach would be to organize a crowd of people to sit in front of an ocean-front property.  When as to leave by the owners and police, the crowd would refuse to leave.  This would result in people being arrested for trespassing (a misdemeanor).  This act could be filmed and distributed by social media or more traditional media outlets, which in turn would raise support for opposing the unjust law, and if all goes right change it.

I put together the following summary on the various approaches that can be taken by the Moody Beach community to improve beach access.  It has been compiled by a community member and a layman that has studied the issue over the last year.  This summary and it supporting details were compiled after listening to the experts, reading the available material, and talking with community members.

This summary is a starting point for improving access to Moody Beach.  It is intended to be a community resource for trying to understand the complexities of Moody Beach access and how to improve it.  It is also a living and breathing document.  If you have input, information, and/or ideas regarding approaches for improving access to Moody Beach, please send them along to FreeMoodyBeach@yahoo.com, and they will be incorporated into the summary when appropriate.

One thing is clear to me regarding improving access to Moody Beach (and all Maine beaches):  If access is to improve it will only be through a united community effort. 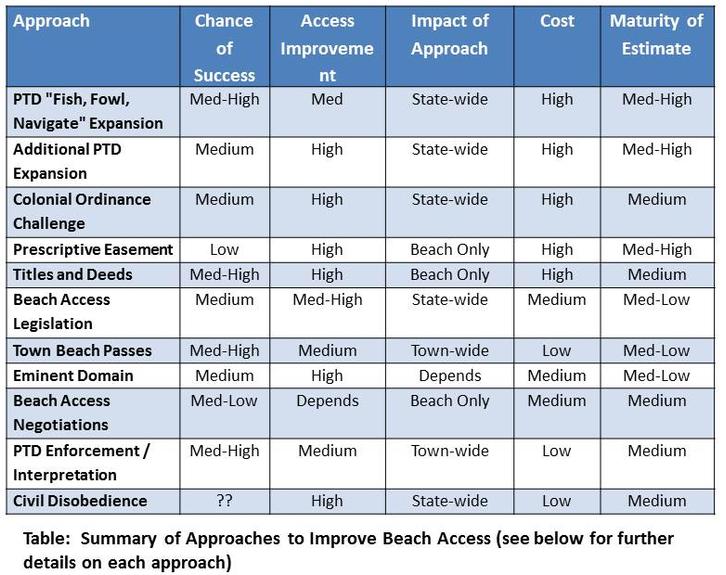